Innovatrics has bested all participants in iris matching, outperforming the competition

In the annual Biometric Rally organized by the US Department of Homeland Security (DHS), Innovatrics’ iris matching has scored top marks and outperformed the other two competitors. With the benchmarking of its iris algorithm by NIST, Innovatrics becomes one of the very few ABIS providers with all three main modalities – faces, fingerprints and irises – earning such distinctions.

The DHS setup last year tested the common scenario of identifying people in high-throughput situations without any staff supervision. The competing systems captured and extracted people’s faces and irises, trying to identify them in real time. Similar setups could be encountered in real life at airports or border crossings.

“Our results show that our new iris recognition algorithm is well-suited for real-life situations it is most commonly used for,” says Matus Kapusta, Director of ABIS Business Unit at Innovatrics. Although considered the most accurate biometric modality, iris recognition is only used in select applications due to expensive hardware and the need for trained staff to supervise the process. However, in use cases such as border control, iris matching provides superior results and virtually zero percent chance of mismatch.

Acknowledgement. “This publication is based upon work conducted under the U.S. Department of Homeland Security Cooperative Research and Development Agreement No. 20-TCBI-001.”

Disclaimer. “The views and/or conclusions contained in this document are those of the author(s) and should not be interpreted as necessarily representing the official policies, either expressed or implied, of the U.S. Department of Homeland Security (DHS), and do not constitute a DHS endorsement of the equipment tested or evaluated.” 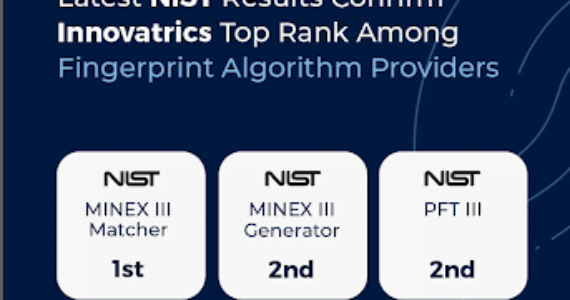 In both MINEX III and PFT III benchmarks, Innovatrics has proved to be a technological leader in biometric …

END_OF_DOCUMENT_TOKEN_TO_BE_REPLACED

Smile liveness combines the best of both active and passive liveness detection, meaning high security with little or …